In this post, I’m going to introduce a useful technique to people who are using, or are interested in using, QEMU on Windows. Basically, you can make the most of your hardware to accelerate QEMU virtual machines on Windows: starting with its 2.9.0 release, QEMU is able to take advantage of Intel HAXM to run x86 and x86_64 VMs with hardware acceleration.

If you have used QEMU on Linux, you have probably enjoyed the performance boost brought by KVM: the same VM runs a lot faster when you launch QEMU with the -accel kvm (or -enable-kvm) option, thanks to hardware-assisted virtualization. On Windows, you can achieve a similar speed-up with -accel hax (or -enable-hax), after completing a one-time setup process.

First, make sure your host system meets the requirements of HAXM:

Next, check your BIOS (or UEFI boot firmware) settings, and make sure VT-x (or Virtualization Technology, depending on your BIOS) is enabled. If there is also a setting for Execute Disable Bit, make sure that one is enabled as well. In most cases, both settings are enabled by default.

After that, if you are on Windows 8 or later, make sure Hyper-V is disabled. This is especially important for Windows 10, which enables Hyper-V by default. The reason is that Hyper-V makes exclusive use of VT-x, preventing HAXM and other third-party hypervisors (such as VMware and VirtualBox) from seeing that hardware feature. There are a number of ways to disable Hyper-V; one of them is to bring up the Start menu, type Windows Features and Enter, uncheck Hyper-V in the resulting dialog, and click on OK to confirm. 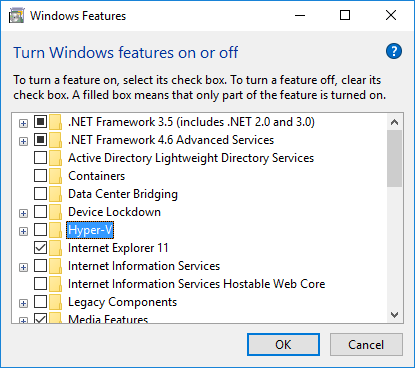 Now you’re ready to install HAXM, which needs to run as a kernel-mode driver on Windows so as to execute the privileged VT-x instructions. Simply download the latest HAXM release for Windows here, unzip, and run intelhaxm-android.exe to launch the installation wizard. (Despite the file name, Android is not the only guest OS that can be accelerated by HAXM.) 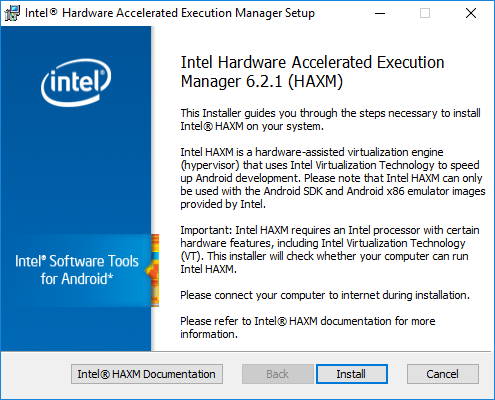 With all that, we’re ready to launch a real VM in QEMU. You can use your favorite QEMU disk image, provided that the guest OS installed there is compatible with the x86 (i386) or x86_64 (amd64) architecture. My choice for this tutorial is debian_wheezy_amd64_standard.qcow2, which contains a fresh installation of the standard Debian Wheezy system for x86_64, available here. To boot it, open a new command prompt window, switch to your QEMU installation directory (e.g. cd "C:\Program Files\qemu"), and run:

You don’t have to leave the screen as the VM boots up, because soon you’ll be able to see the Debian shell and log in. 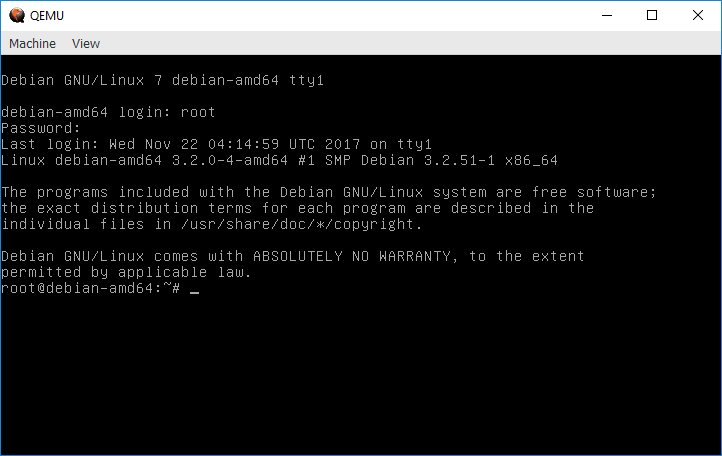 To feel the difference made by HAXM acceleration, shut down the VM, and relaunch it without -accel hax:

If you’re still not impressed, try a more sophisticated VM image such as debian_wheezy_amd64_desktop.qcow2, which boots to a desktop environment. VMs like this are hardly usable without hardware acceleration.

That’s it! I hope HAXM gives you a more enjoyable QEMU experience on Windows. You may run into issues at some point, because there are, inevitably, bugs in HAXM (e.g. booting an ISO image from CD-ROM doesn’t work at the moment). But the good news is that HAXM is now open source on GitHub, so everyone can help improve it. Please create an issue on GitHub if you have a question, bug report or feature request.